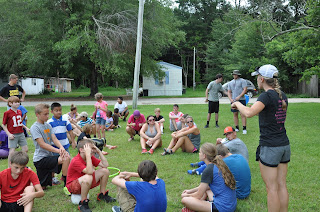 Twenty years ago, my new life began.  I married Christy and we began our journey.  On that day, if you had told me the next 20 would be the best 20, I'm not sure I would have believed you.  I hoped for it.  But I just didn't know for sure.

Now, as we celebrate our 20 year anniversary I want to take a moment and reflect.  Below are 20 memories that make me honored to be Christy's man.  Here they are (in no particular order):


20) The birth of our daughter, Madison.  One day we are going to find out she is truly an angel.  Until then, we will pretend she's a normal teenage girl.

19) Our first family trip to the beach.  We have some wonderful friends we have vacationed with in the past.  But the year it was just the four of us?  Well, it was amazing.

16) The day we moved to South Carolina.  We left the Dallas/Fort Worth metroplex to serve in a town of less than 1,000 residents.  There were more people in our Texas apartment complex than in our new home.  And Christy never once complained.

15) The Holy Land.  We got engaged on the shores of the Sea of Galilee.  Need I say more?

13) Seeing Christy by herself at the kitchen table with her coffee and Bible.

12) Muir Beach.  We spent a couple of days by ourselves on the Pacific Coast.  Not a care in the world.

10) Cross Fit.  I spent a large portion of the first 14 years of our marriage praying for Christy to find her passion.  When she started WOD'ing, she found it.

9) Madison's baptism.  Christy's love for Jesus is evident in Madison's life.  When Madison shared her faith with her little corner of the world, it was a picture of our greatest prayer begin answered.

8) The cruise.  Some very special friends allowed us to accompany them on a cruise to the Bahamas.  One night, it was just Christy and me at the front of the boat doing our best imitation of D'Caprio and Winslett (Titanic).  Being with Christy in that moment watching the moon's light reflect off the water made me feel like I was the "king of the world."

7) Brock's baptism.  It was in a creek.  It was raining.  He lost his shoes as he went under.  I think I saw a snake swimming in the distance.  It was perfect.

5) Samson and Lucy.  Christy had never had a pet.  Much less two.  Seeing her fall in love with our dogs was awesome.

3) Purpose-Driven conference.  We went to SoCal in 2003 and God began to shape in our hearts what ministry would be like for us.  We knew from that point, we would be on the fringe and would not fit in most molds.  But we embraced it...together.

2) Ugandan kids.  Several years ago, we hosted members of a Ugandan children's choir.  My lady loves children.  When they're from Africa, she loves them more!

1) Spending our 20th anniversary with 20 teenagers on a mission trip.  It was the perfect anniversary gift.   There could be no better way for God to put a bow on our first 20 than that moment.

I love you Christy.
Posted by Chad Rowland at 8:10 AM