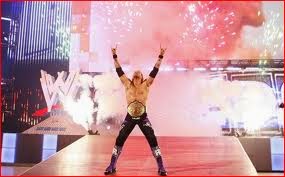 It may seem ridiculous to think that professional wrestling can teach us about life.  But the world’s most popular soap opera for young boys and immature men actually teaches some powerful lessons.  By the way, I may or may not sometimes accidentally set my DVR to record WWE or TNA wrestling.

Each wrestler enters the arena to a theme song.  Whether it’s a popular song or a low budget soundtrack written for that particular wrestler, each performer has entrance music.  It’s written to have a certain effect on the crowd, the opponents, and the wrestlers themselves.

I’ll never forget the first time I saw the Road Warriors enter an arena.  Their song was “Iron Man” by Black Sabbath.  It was the music that ratcheted up the intensity and struck  fear into the hearts of their opponents.  As soon as the haunting guitar riff began, the mood in the room was altered.

You and I have entrance music too.  When we enter a room, something changes.  We immediately affect the chemistry in the room.  We bring intensity.  Or happiness.  Or fear.  Or intimidation.  The emotions we bring vary, but we all have a song.

There have been times when I stopped to listen to my entrance theme and didn’t like what I heard.  So I asked God to give me a new song.  A song that would inspire and not discourage.  Build up and not tear down.  Produce hope instead of despair.

What song plays in the background as you enter a room?  Are you ready for a different song?  You can always change the tune.

And just for the record...“Rise Up” by Disciple is my preferred entrance music.