For the last two weeks, I have been underground.  At least it felt that way.  I was actually on jury duty.  And now that the court system is finished with me (for now), I've got some time to think and write.

It makes sense to me that I should begin with what I learned the last two weeks from the jury box: 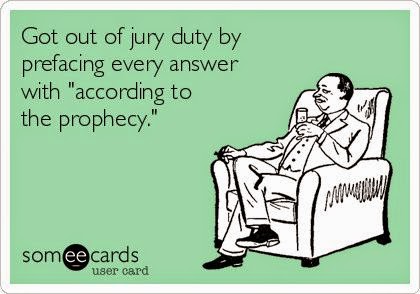 1)  "Innocent until proven guilty" works well in in our judicial process but is hard to implement in normal every day life.  We are far too quick to render judgment on people.  Instead of demanding that people prove their innocence, what if we began with innocence and forced people to prove their guilt?

2)  I am selfish.  Well, maybe that is not something I learned.  Maybe I was just reminded of how selfish I am.  Seriously.  There I was complaining about having to start every day at the court house while literal prisoners were forced to start their days in jail.

3)  Brokenness leads to bitterness.  Hearing people talk about their past experiences with law enforcement was sad.  Some were caught red handed and simply faced the consequences of their decisions.  But instead of experiencing healing and hope, they refused to let it go.  They refused to move on.  And now, only bitterness remains.  When we respond to brokenness with blame, we soon experience bitterness.

4)  We are surrounded by unsung heroes.  The men and women in our police department, sheriff's office, and fire department, as well as the EMS workers deserve so much more praise than they receive.  They face danger and often prevent true tragedy.  It takes a special person to protect and serve.

5)  The world can turn without me.  I was basically unavailable to everyone outside of city hall for 10 days.  Hopefully the world is a better place when I'm in it.  But it can definitely go on without me.

I certainly don't miss jury duty.  But I'm probably better off for having had the experience.  Just don't make me do it again!